Some indoor bike manufacturers have models which seem to be identical, making it difficult to choose one from the other. Here is a Sole SB700 vs 900 comparison which puts the spotlight on the differences to help you decide which one to choose.

Sole is a big name in the cycling industry for both outdoor and indoor bikes. I’m looking to buy a Sole indoor bike but noticed there are few differences between the SB700 and SB900 for comparison.

In this Sole SB700 vs 900 comparison we take a close look at each bike to establish where the differences lie and why one is a better option.

What Are The Differences Between Sole SB700 And Sole SB900?

Pedal design is important because it determines which shoes you can and can’t wear as you use the bike. The Sole SB700 has a single design on its pedals. It has toe cages and straps which are simply used by users wearing regular trainers. You fit the tip of your shoe and about a quarter of your foot into the cage to keep your foot firmly held on the pedal.

The Sole SB900 has a dual design in its pedals. This SPD design has both toe cages and clips which are used with indoor cycling shoes. They use cleats on the sole to attach your feet to the pedals. Cages are not as firm as cycling shoes and could sometimes slip off the foot.

Resistance in indoor bikes refers to how easy or difficult it is to pedal. These bikes are designed to mimic outdoor riding so there are mechanisms used to create the feel of riding on flat ground as well as the feel of riding up a steep hill (and everything in between).

This system works more or less like the brakes in a car or outdoor bicycle.  Resistance is applied to the flywheel using cotton felt pads. These are strong pads which are pressed on to the rotating flywheel when you adjust the dial to increase resistance.

In some bikes the pads are above the flywheel and are pressed down onto the wheel when resistance is adjusted upwards. In most cases however, the pads are on either side of the flywheel therefore creating a ‘biting’ effect to generate increased resistance.

As the name betrays, magnets are at work here. The flywheel in spin bikes is made of steel. This serves to add on significant weight but also works in favor of the system because steel is by nature a great magnetic conductor.

On either side of the flywheel are placed two magnets which generate the required resistance. When you turn the dial to increase resistance, the magnets are pulled closer to the flywheel and this helps to slow down the wheel therefore generating resistance.

The different resistance systems are responsible for a few other differences in these bikes, noise level being one of them. We must start bynoting that neither of these two bikes can be said to be particularly noisy. That said, one does produce more noise than the other.

The Sole SB700 does make some noise. With a friction resistance system, the action of the pads on the flywheel produces a soft ‘whooshing’ noise. It sounds almost like light whistle.

In the Sole SB900, there is no noise at all. There are no parts coming into contact with each other and therefore no friction.

This is another difference which is as a result of the different resistance systems. Some spin bikes are said to be maintenance free. The Sole SB900 is one of them. The Sole SB700 cannot boast of that.

In the sole SB700 the fact that the resistance system depends on friction means that something will wear out at some point and require replacement. After consistent use of the bike, the cotton felt pads wear down.

Apart from replacement at the end of their life, the may also require cleaning. If you notice that the resistance on your bike is not as strong as it used to be even after adjusting it, it is probably a sign that it is time to replace these pads. 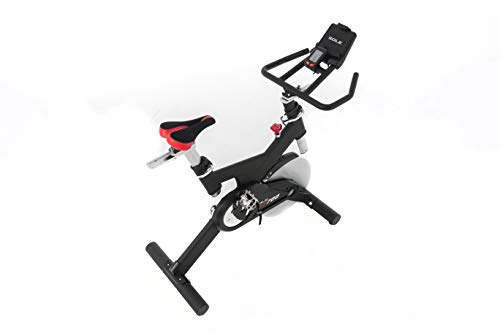 Despite some use in commercial settings, the Sole SB700 is designed for home use. It is well able to handle both light and heavy use thanks to a durable 2mm oval steel tubing frame which is then covered with aluminum.

Its dimensions are 40 inches long and 21 inches wide so you can fit the bike in a small corner of a room without having to rearrange furniture.

The 48 pound flywheel is relatively heavy. Although some manufacturers in the industry dispute the idea, it is generally accepted that a heavier flywheel is advantageous because it assures you of a smooth, consistent ride because the wheel gains and maintains momentum from your pedaling action.

The seat, like other seats in spin bikes cannot claim to be anywhere near comfortable so if you are a beginner, this is one feature which takes some getting used to. It is however 4-way adjustable in that it can be adjusted upward, downward or back and forth to achieve a perfect individualized position.

Handlebarsare also 4-way adjustable with multiple grip positions to allow you shift from one to another in the course of a ride.

The bike weighs 140 pounds but has a set of wheels on the front which allow you to easily move it from place to place despite its weight. It has a maximum user weight capacity of 300 pounds (136 kg), which can be considered standard for bikes in this price range.

Key accessories include a tray and 2 water bottle holders, one on each side of the console. 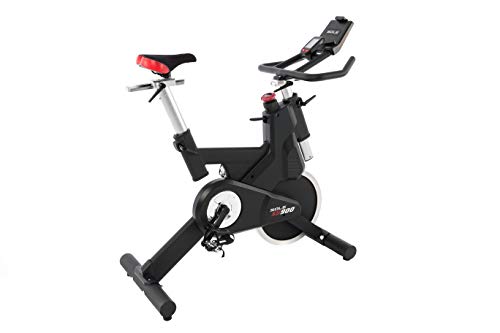 The SB900 is Sole’s highest -end spin bike which has earned a reputation as a quality, affordable indoor bike. It takes up the same amount of space taken up by the SB700 and also has fully adjustable seat and handlebars. Its flywheel also weighs 48 pounds. Itsmaximum weight capacity is 300 pounds (136kg).

It features a basic 3 inch by 4 inch console which like its counterpart’s console displays standard metrics like distance, speed, power output, RPMs and calories burned. This console is compatible with a heart rate monitor so if you have a monitor you can connect it and be able to keep track of your heart rate as you go.

The drive system has a Kevlar drive belt. Belt systems are considered advantageous because they require little or no maintenance compared to chains. Kevlar is also an impressive feature because these belts are stronger.

The assembled bike weighs 160 pounds (72.6 kg)which makes it a heavy one, despite transport wheels used to roll it from one place to another. It is advisable to have it assembled in the position you shall be using it to avoid having to move it again.

Where user height ranges are concerned, this one can take users ranging from 5 feet to 6 feet tall.

Some downsides include a console which cannot be used to access pre-set workout programs and lack of a cooling fan.

From this review it is clear that the Sole SB700 and 900 are actually very similar, almost identical. They both have a 48 pound flywheel, 4-way adjustable seats and handlebars and are both compatible with heart rate monitoring devices.

Both have a basic console which displays standard metrics and the maximum weight they can take is 300 pounds (136 kg).

The main differences in the bikes is in the pedals, resistance system and weight. The SB900 is about 20 pounds heavier than the SB700.  From this we can conclude that the Sole SB900 is the better option because it is quieter and virtually maintenance free. You never have to think about replacing cotton felt pads. The pedals also give you an option between cycling shoes and trainers.

Where can I get pedals to replace a pair on my sole SB700?

You can buy these and other replacement parts from the Sole service department.

What makes a Kevlar belt stronger than other drive belts?

In Kevlar belts, polyester cords are replaced with stronger Kevlar cords. These make it stronger and is the reason they don’t wear out as fast.