NordicTrack manufactures some of the world’s best, high-quality, cutting-edge and price-friendly stationary bikes. Which between the S15i and S22i is the best commercial bike?

Hello, I’m Kimberley and I just love the collection of NordicTrack Studio Cycle bikes.These bikes provide you with high intensity calorie burning training programs in the comfort of your home.

They have less differences between them compared to similarities which makes it incredibly difficult to select one or the other. An obvious difference that may be immediately spotted is the difference in the size of their LCD monitors.

Another less obvious difference lies in their level of resistance. The S22i, being that it was modeled after the S15i, has been bumped up 2 levels from S15i’s 22 to the now 24 levels of resistance. It will be interesting to see what other differences can be found between the two.

NordicTrack S15i vsS22i  – How do they compare?

Both the NordicTrack S15i and the S22i are built of corrosion resistant steel which guarantees you a lifetime of use. They both have an inertia-enhanced flywheel which relies on your workout intensity to increase or decrease resistance.

This means that the harder you work out, the faster the wheel turns. To safely stop the wheel at high revolutions per minute, the NordicTrack team added an emergency stop button.

The pedals are quite unique for both bikes, the NordicTrack is easily set up with two-way pedals meaning you can either use the side with the toe-cage or, if you prefer to, you may opt to flip the pedal to ride on the flat surface like on an outdoor bike.

If you wish to, the pedals on these bikes could be swapped for other alternatives if you have a specific type of pedals that you like to cycle on. They both can hold up to 350 pounds. If you have some special cycling shoes, the pedals provided are compatible with clip-in mechanism.

I highly recommend both bikes because they have versatile pedals that do not require special cycling shoes to ride.

NordicTrack S15i has a 14-inch touchscreen while the S22i feature a 22-inch screen that display vital information and help the user connect with the virtual trainers and spinning classes available. Both bikes feature a camera attached to the screen with speakers at the back.

Both bikes have the ability to screen cast the bike to an external screen like a TV with a HDMI port on each side of the screen for ease of connection. These screens can also be tilted up or down to allow different users to view at the best angle possible for their height.

S15i and S22i have an extra feature that incorporates a cooling fan on the sides of the screen to help you cool off mid training.

With both bikes, you can raise and lower the handle bar height, seat post, move seat forward and backward and align the angle. They have quality road bike seats that are adjustable in two ways while the handlebars are only one directional.

NordicTrack S15i and S22i have the added benefit of a cooling fan for the user which is something that makes them both very comfortable to cycle on.

Both bikes use a magnetic flywheel resistance which can be automatically controlled based on your cycling intensity and by using the button controls on your handlebar.

Handlebars coated with firm rubber grip are built into both bikes and they both can hold two water bottles. NordicTrack comes with 3-pound dumbbells which boosts your training options with racks provided for easy accessibility.

One of their best features is that NordicTrack can raise and lower in incline and decline simulating outdoor cycling better with realistic resistance levels. The range of incline or decline available is between 10 to 20 degrees.

With speakers located at the back of the console, this is the only drawback we could perceive. Either way, the quality of the speakers is great and the volume regulation is possible with buttons found on the side of the console or through the LCD touchscreen.

Both bikes have great functionality because the resistance is automatically adjusted, you can incline and decline the bike and they even threw in dumbbells to compliment your training. 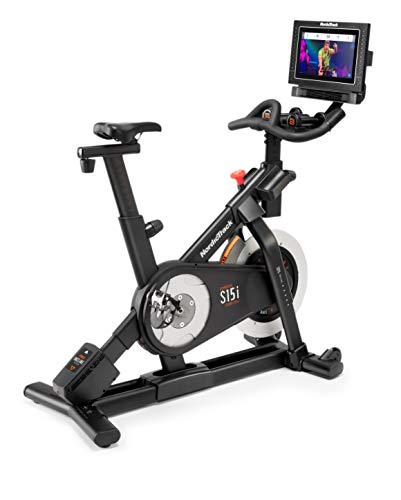 Bike features 14-inch HD touchscreen that you can swivel to adjust according to your sitting position and height. With the streamed workout programs, you will enjoy virtually streaming and training with others on the same platform across the world.

The inertia enhanced wheel is powered by magnetic resistance which allows you to cycle in complete silence. With conveniently placed resistance adjustment buttons on the handlebars, you can adjust your 22 levels mid training.

Incline and decline ranges between 10 and 20 degrees with the incline, you can challenge yourself in the same way you would if you were outside cycling uphill. It has an in-built Google Maps that will literally take you around the world. Weights are also provided for variety in training. 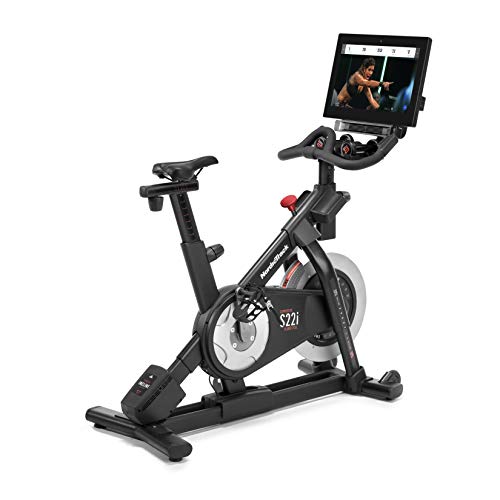 The steel frame is classic and holds securely a 30-pound heavy flywheel with magnetic resistance which is ideal for a steady and silent cycling experience at home.

The handle bars on the S22i are not only anti-grip but also have a coating that is sweat resistant. They also have control panels on either handle, one for adjusting the resistance and the other for the incline and decline alternatives.

Virtual training on this bike is made easy because the 24 resistance levels are digitally preset and can be controlled by the buttons on the handle bar or through the touchscreen. Because programs are preloaded, the bike automatically adjusts to whichever program you are on currently and is able to take you on scenic drives virtually anywhere in the world.

The pedals on this bike require no special cycling shoe because they have toe cages. This bike allows for 20% incline and 10% decline which enhances your experience.

Verdict and Conclusion: So, which between the NordicTrack S15i and S22i Bikes is the best Commercial Bike?

NordicTrack S22i is hands-down the best commercial bike for the sole reason that it gives you an iFit Bluetooth enabled chest strap that is missing in the S15i. however, the S15i makes up for this by enabling you to connect to it seamlessly, if you have a Bluetooth heart rate monitor.

Other than that, both NordicTrack bikes are great selections for anyone and everyone who loves cycling as a workout.