Keiser and Stages are two highly reputable names in the world of indoor bikes. Both are high end bikes with a not-so-modest price tag. This Keiser M3i vs Stages SC3 comparison looks at two products from the two giants to guide you towards a bike best suited to your needs.

I have some Keiser M3 Plus bikes and I’m looking to invest in a few more bikes for my gym. Keiser has developed a new model which should work fine but some clients have asked me to consider the Stages SC3 as well.

Here is an analysis of the two bikes with details on features common in both and features specific to each to help you make a final pick on your next indoor bike.

What Are the Differences Between Keiser M3i and Stages SC3?

Keiser M3i Vs Stages SC3 – How Do They Compare?

If there is one characteristic Keiser has marketed about its products it is this. They claim to be the first company to place the flywheel on the rear as opposed to the front like in many other indoor bikes.

The reasoning behind this is that a frontflywheel puts it within the sweat zone. This means a user’s sweat drips on the wheel and considering the bike is designed for commercial use, there is likely to be a lot of sweat dripping on it. Sweat can cause increased corrosion and interfere with tension.

The Stages SC3 has a front placed flywheel.

The Keiser M3i is significantly lighter than the Stages SC3. The Keiser bike weighs 85 pounds (38.5kg) while the Stages bike weighs 100 pounds (43.5kg). Although weight differences can be as a result of many other variations, a good part of the difference has been attributed to the weight of flywheels in the two bikes.

The Keiser flywheel is what many users describe as ‘questionably light.’ The average weight of an indoor bike flywheel is anywhere between 30 lbs. and 50 lbs. With a flywheel weighing just 8 lbs., Keiser’s is well below average. Users have reason to question this.

The general assumption in the industry has always been that a heavy flywheel is advantageous because it makes the ride smoother and increases momentum. It is worth noting that Keiser has been notably vocal in opposing this notion. They say a heavy flywheel is not necessary for a smooth, consistent ride.

They say they have successfully achieved what other manufacturers achieve with a heavy flywheel though their improved belt drive design which works in conjunction with the eddy current magnetic resistance system. Therefore, they conclude that flywheel weight is to a large extent inconsequential.

Some indoor bikes have no system to record and display metrics in the course of an individual workout session or recall metrics from past sessions. The two bikes under consideration both have a computer system, though they are quite different.

The Keiser M3i has a basic, battery powered console which displays power output, cadence (RPMS), elapsed time, the current resistance level and distance. It also has a backlight which detects dim light and automatically comes on in dim light. This is intended to save battery power for use only when required.

The Stages IC3 has an interesting computer system. It is made up of a company specific, battery powered power meter whose function is to measure power delivered by cycling motions. This Stages Power Meter is a pride for the company because it has proven to be superior in terms of accuracy and reliability. It is also compatible with Bluetooth and ANT+.

Another unique component of this computer is the EcoSCRN console. It is Eco-friendly because it is run by power generated by the rider and therefore doesn’t need any batteries. The systems works through a generator which is located in the flywheel hub and wiring hidden in the handlebar stem.

Unlike the Keiser computer which displays RPMs, speed, calories burned and other basic metrics, this one also displays the rider’s maximum, average and totals. The backlight is constantly on, different from Keiser’s backlight which only comes on in dim light. 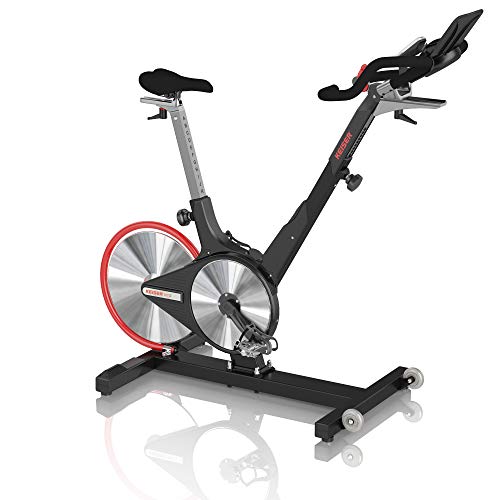 The Keiser M3i is the third model in the company’s M series of bikes, after Keiser M3 and M3 Plus. It is a sturdy, durable bike with a solid stainless steel frame and heavy-duty aluminum components. It is designed with commercial use in mind though it can be used for home gyms as well.

One of the most outstanding features is 24 levels of resistance. This wide range makes it suitable for a variety of users with different goals such as cardiovascular training, muscle toning and weight loss.

In a further attempt to accommodate a wide variety of users, it has a V-shaped frame with handlebars which can be adjusted vertically (up and down) as well as horizontally (back and forth). This shape makes mounting and dismounting the bike easier for users. The seats are also 4-way adjustable to accommodate people of just about any height or frame.

Both of the M3i’s predecessors lacked Bluetooth ability. This bike now comes with this highly demanded capability. With it you don’t have to write down your workout values in a notebook for future comparison. With wireless connectivity, you can create a profile on one of the compatible apps and save your details.

You may be wondering which apps the M3i is compatible with. Some apps supported by the M series are Keiser M3 Series Pro on Android, iOS, GOInd on iOS, Empowered BeTrained on Android and Ride Buddy Buckets on iOS.

This bike arrives partially assembled. The main sections left for you to assemble are the frame, flywheel, crank arms, pedals and console. Be sure to follow the instructions in the manual to the letter. 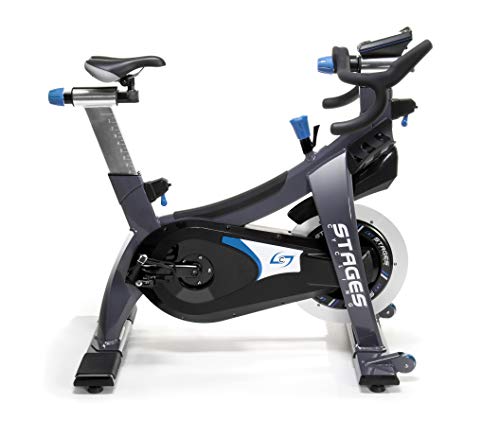 The Stages SC3 indoor bike features a strong aluminum frame with a footprint of 43.5 by 24.5. This makes it relatively small, suitable for a small apartment living room or bedroom.

A notable feature in this bike is its resistance adjustment. With this bike you can adjust difficulty levels using two different methods. There is a dial used to make small increments in resistance. There is also the SprintShift lever which allows you to make more drastic increases or decreases in one tap.To stop a fast rotating flywheel, use the emergency push to bring it to an immediate stop.

The flywheel is a high inertia, cast iron perimeter weighted wheel which means that the bulk of its weight is concentrated around its edges. This gives you a smooth, road-like ride without necessarily incorporating a very heavy flywheel.

When it comes to pedals, you have two choices to choose from. The bike’s pedals have a dual design, incorporating the SPD system and toe cages. SPD (Shimano Pedaling Dynamics) is a design of clipless pedals with a small cleat which fits in a recess in the sole of specially designed cycling shoes.

It also has toe cages which allow a user wearing regular shoes to fit their toes into it for better grip.

Considering the weight of this bike (100 pounds) it might worry you to think about moving it from one place to another. To take care of this concern, the manufacturer included wheels which are used to roll the bike from place to place rather than have to lift it.

The drive system is dependent on a Stages Gates Carbon Drive fiber belt. Belts are preferred to chains because they require no maintenance such as lubrication.

If you are a tech savvy user you will be glad to know that this bike’s computer is both Bluetooth and ANT+ compatible.

Keiser’s M3i and the Stages SC3 are excellent quality bikes. Both have a belt system requiring little or no maintenance and can boast of Bluetooth connectivity. Their pedals are designed to cater for users wearing cycling shoes as well as those wearing regular shoes.

A magnetic resistance system is used in both bikes to give users as smooth, consistent ride. They are both have a relatively small footprint so they can fit in small spaces. If you are using them for a commercial gym, you can fit many of them in a room.

Verdict: So Which One Is Better? Keiser M3i orStages SC3?

Despite convenient features and good quality in both, the Stages SC3 stands out as a better choice.  It has just about everything the Keiser M3i has as well as a superior computer system with an eco-friendly element incorporated into it.

Many users are looking to transfer their personal data so the Stages product gives them an alternative to Bluetooth. ANT+ is widely used among fitness enthusiasts.

Stages also has a higher maximum weight capacity making it more suitable for a variety of users.

Can the Stages Power Meter be used in another indoor bike?

No, this power meter can only be used indoor bike systems made by the same manufacturer.

How complicated is the Keiser M3i assembly process?

It is a pretty simple process which can be done by anyone provided instructions in the manual are followed. It should take you between 45 minutes and 2 hours at most.